Chef Jonathan Sellitto ’01 has been lauded for his “skills of a butcher and mind like a chef” (Atlanta Magazine) while down in Atlanta’s Lusca Restaurant, where he was in charge of the charcuterie. Having learned to make sausage in Italy, he honed his skills stateside in Boston before heading down South to turn out meat boards with delectables such as mortadellas, terrines of fois gras and paté, or poultry en croute. Now he is returning to the New England area where he plans to open his own butcher shop and charcuterie. We are so glad that he returned to the Abbey as well; through his knowledge, knife skills, and sense of humor, our students learned, enjoyed, and ate a great deal.

I walked into the dining hall to see an unknown man towering over the half swine carcass with a knife raised and my fellow students surrounding him staring in awe. No, this was not a Mayan sacrifice but a lesson in butchering by the prestigious and surgical Chef Sellitto. Raised an Italian American, he learned his craft by spending some years of his early adulthood in Italy on a hog farm. He explained to us that most commercial butchers today use intricate machines to tear the pig apart, but he showed us his preferred technique of using just a knife to make minimal cuts and then tear the rest with his own hands. I had the fortunate experience to aid him in the process, helping him move the hog around as he tore off the limbs with his bare hands. I cannot say that I found any sort of beauty in the process, but I did come to appreciate the craft much more. Like anything else, the best product is produced by hard, meticulous labor, and Chef Sellitto made that clear when he explained how the hogs were raised. Not to call my father’s cooking inferior, but Chef’s Sellitto’s simple pork loin recipe was undeniably the best I have had. David Ingraham ‘17

One of my favorite culinary events of the year involved learning various butchering techniques on that of a pig and a chicken. Chef Sellitto instructed us on how to butcher a pig completely, using knowledge he has gained in Italy. He especially taught us the importance of actually butchering the pig yourself rather than with the help or complete use of machinery to do so. This makes for better separation of the meat and better overall quality in the end. After finishing the butchering of the pig, we were given chickens that we were allowed to try to butcher ourselves. It was a great experience, and I have actually used what I learned during this event to teach my mother how to butcher a chicken. I enjoyed it and am glad I now have this skill to use for the rest of my life. Nick Nadalin ‘17

I have always wanted to see butchering. We eat a lot of meat and know a variety of cuts such as sirloin and tenderloin. However, people tend to neglect where this meat comes from. Butchering a hog allowed me to understand where each cut came from and appreciate the animal even more. We were able to get cuts such as ham, pork loin, and pork belly from the hog. Cooking these cuts that we butchered ourselves allowed me even more to feel a sense of respect for the animal and appreciate the meat we take for granted. – Seha Choi ’16 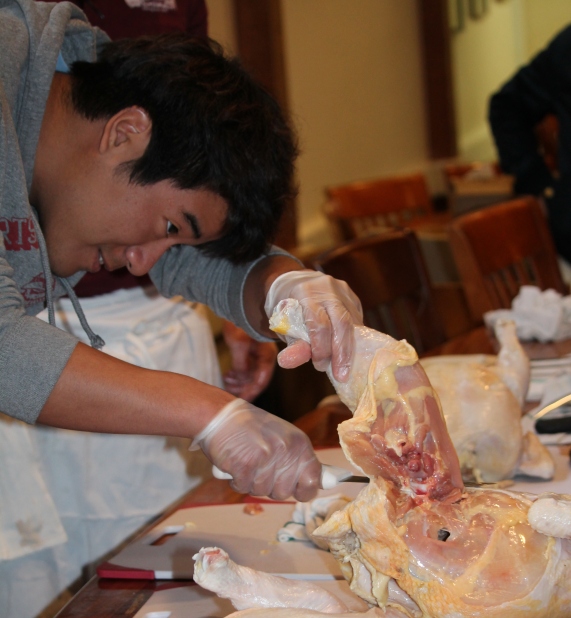 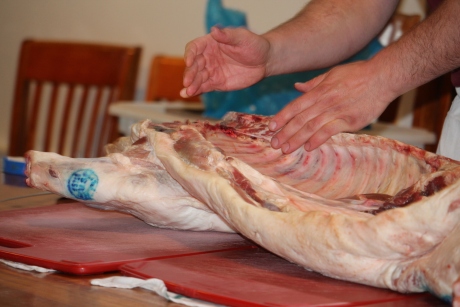 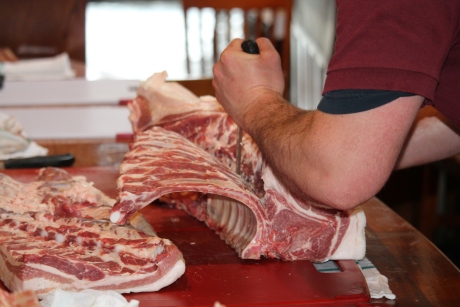 On a gray Sunday afternoon, the Culinary Arts Club learned how to take apart chickens and half a hog to get cuts of meat, which we were able to flavor and grill. Chef Sellitto brought in half a hog, which he used to demonstrate how he uses the natural joints of the animal to break the hog down into five major sections. He explained that depending on which cuts are most valued, the animal is broken down slightly differently, but that he always tries to minimize waste by making things like sausages and salamis. After the hog had mostly been processed, we got to try our hand at breaking down chickens. While some people took a more creative approach, Grace and I followed the more traditional cuts. When all the meat (hog and chicken) had been cut down and rubbed with herbs and spices, we took the pork chops back to Brigid’s and attempted to grill them. After a mishap or two with turning the grill on too high and setting the meat on fire, and probably opening the grill a few too many times, the pork chops were finally done. We proved to ourselves that we could successfully cook our own delicious dinner (though it was supplemented with Mrs. Bonin’s grilled chicken from our butchering) from start to finish without any major catastrophes with the help of the skills we had learned throughout the year!  Hannah Banderob ’17

I’ve rarely killed a creature alive before, let alone slaughtered a hog and chicken with butcher’s knife. I disliked to do it because of its slippery texture that felt like a corpse, which indeed it was. Also, the knife was so blunt that I took much effort in tearing the chicken in half by hand. Fortunately, everything else was not so brutal as that went. After sawing the loin from the leg, we gave a thorough massage to it with spices, of which the smell was so delicious that I could not resist taking a bite from it directly. The cooking was even more fascinating. We had a barbecue on the hog and chicken that day. The scent attracted the whole dorm to come. And we almost a dozen of people lived the next few days mainly on the grill, escaping dining hall at mealtimes. At any rate, I will be perfectly willing to stick my hands inside the cold chicken again only for having a second chance of such wonderful experiences! – Peter Liu ’19

The Culinary Arts Club learned to break down a hog from our very own Portsmouth Abbey Alumnus named Jonathan Sellitto. We learned about the four main parts of the hog: the shoulder, loin, belly, and ham. We were taught where on the hog’s body they are located and how they are prepared for a dish. We watched Chef step by step cleanly remove each of these parts from the hog. Next we broke down chickens on our own. We first had to dislocate the legs of the chicken before turning it over and cutting out the meat. Afterwards, the members of the club all marinated both the chicken and the pork before taking it and grilling it outside of St. Brigid’s. It was a lot of fun! – Grace Gibbons ’17

Grace learning a thing or two about a chicken 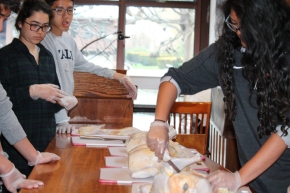